The Mequon-Thiensville Dam was constructed in 1882 on the border of the City of Mequon and Village of Thiensville. The M-T Dam was constructed to provide hydropower for a grist mill.  Historic records indicate the dam was breached and rebuilt multiple times. A WDNR dam inspection found multiple structural deficiencies with the M-T Dam. The current dam has a structural height of 13 feet and a hydraulic height (difference between water elevation upstream and downstream of the structure) of 6.5 feet.  The dam forms a 700 acre impoundment, the largest in Ozaukee County. The Fish Passage Program partnered with the City of Mequon, Village of Thiensville, WDNR, U.S. Fish and Wildlife Service, and others to construct a nature-like fishway in the abandoned millrace adjacent to the dam in 2010.

Fish and other aquatic life are now able to navigate upstream past the 6.5 foot high dam through a series of
pools (resting areas), runs and riffles constructed in an 800 linear foot, nature-like meandering stream channel. The fishway entrance is located downstream of the north dam abutment and the fishway exit is immediately upstream of the dam in the impoundment. 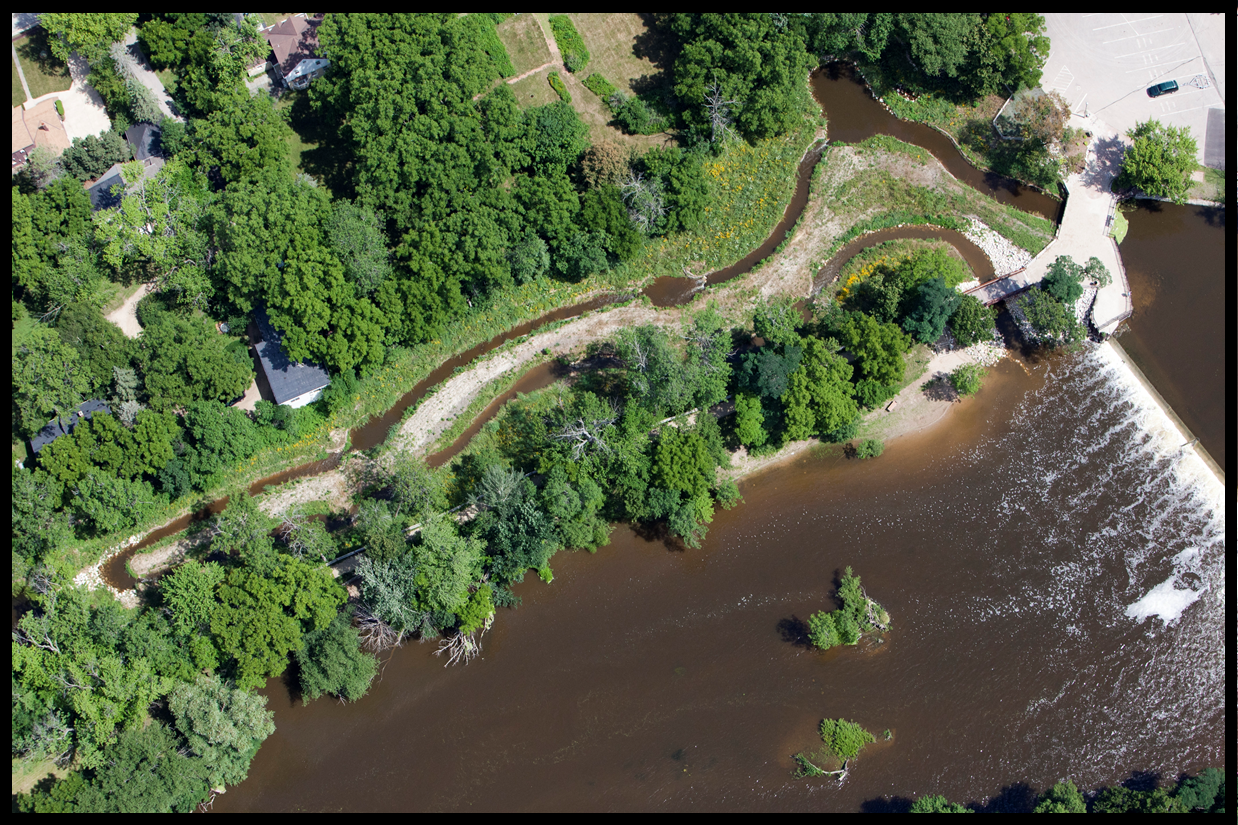 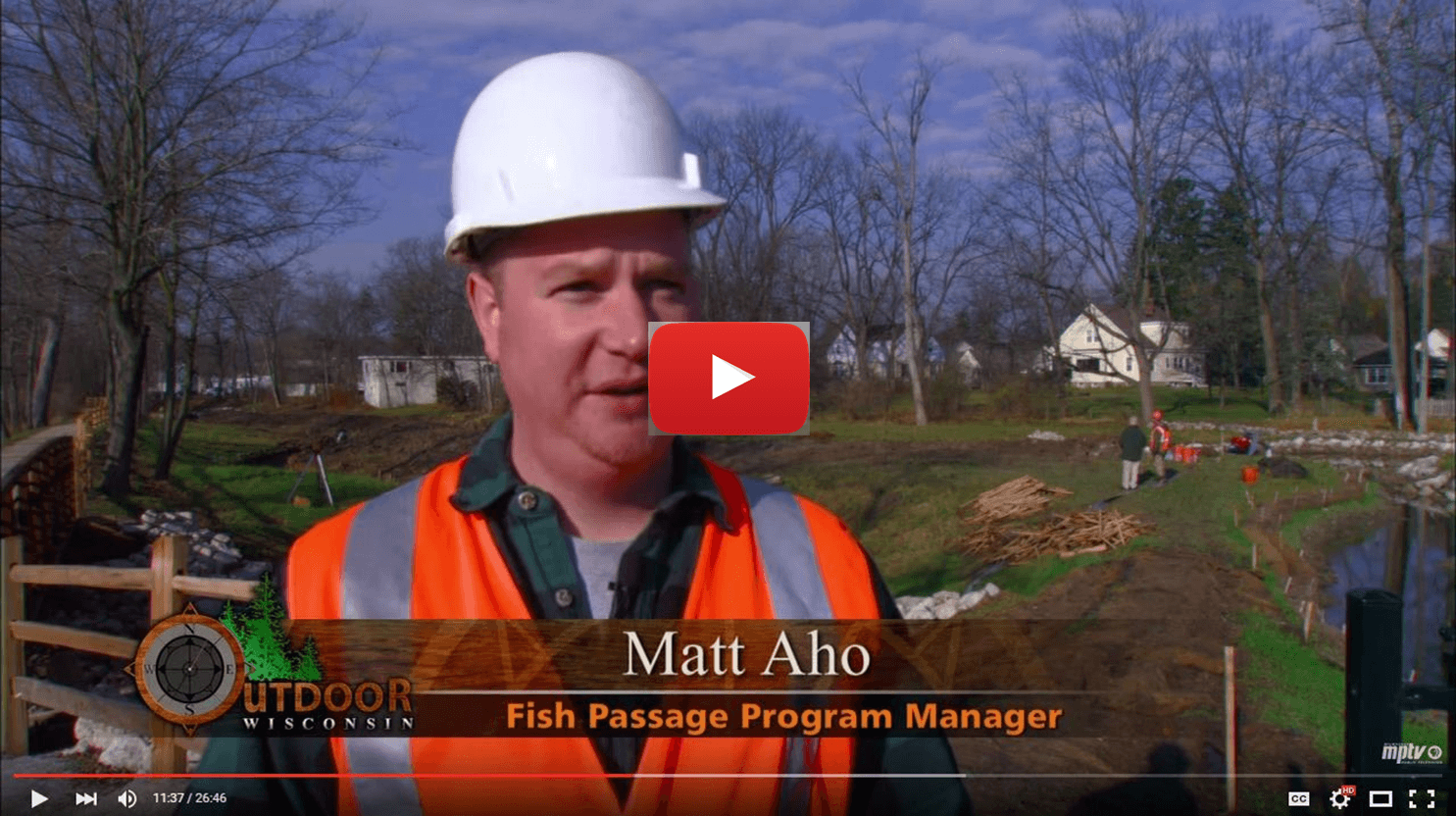 The original settlers to the area were drawn, in large part, to the Milwaukee River. The river provided a rich source of fish and game, transportation, and water power. The actual construction of the dam and flour mill started after John Weston sold his property to John Henry Thien in the summer of 1842. In all likelihood, the dam and foundation for the flour mill were built simultaneously during the low water of late summer of 1842. Recognizing the power offered by the 6.5 foot tall raceway impoundment, Thien added a sawmill between the dam and his flour mill in 1843.

The first flour mill, a three story wooden structure, burned to the ground in 1874 during one of Thiensville’s frequent bog fires. A second flour mill, a five story stone structure, was built in 1876 and served the farming community until just after World War II. The building fell into disrepair and was eventually razed in 1956. The dam also fell into disrepair following the failure of the Thiensville Milling Company in 1939. Recognizing the importance of the impoundment to recreation in the area and the value of over 200 properties upstream, ownership of the dam was transferred to the Mequon Township Advancement Association in 1941. In 1962, the group now known as the Mequon-Thiensville Advancement Association transferred ownership of the dam to the City of Mequon (75%) and the Village of Thiensville (25%). That shared ownership of the dam and raceway (which became a fishway in 2011) remains in effect today. 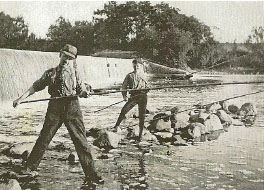 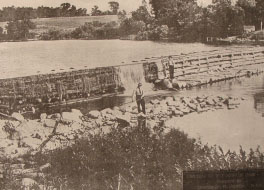 The village of Thiensville and U.S. Fish and Wildlife Service installed an underwater camera and two passive integrated transponder (PIT) tag readers in 2011.  The camera and tag readers, along with extensive fish tagging by Ozaukee County and WDNR, have indicated successful passage of thousands of fish from dozens of species, including many tagged fish. 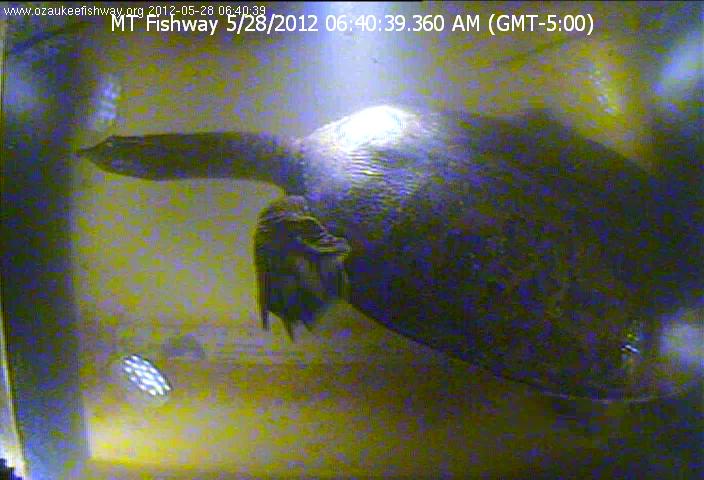 Visit OzaukeeFishway.org - Live streaming video from the Fishway and Riverwalk - Photo and video galleries of fish and wildlife in the fishway - Construction photos and information - Additional details on fish monitoring efforts 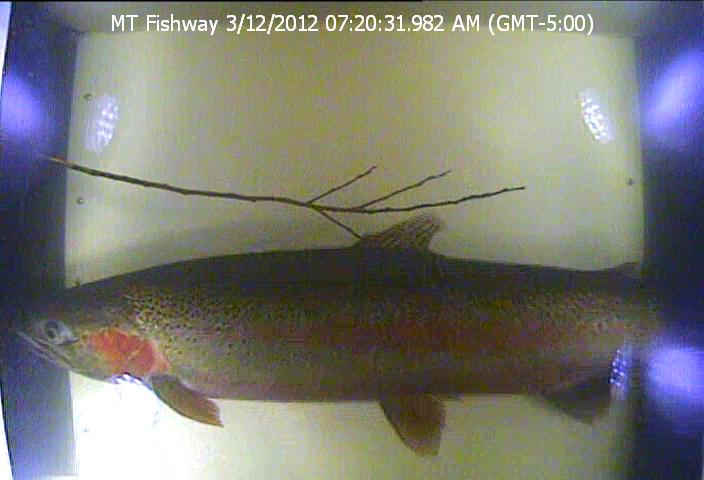