Annexations have moved the east limits of the Village of Saukville a great distance from this bridge, but the bridge still serves as the gateway to "downtown" Saukville and the area where most of the homes and business places have been built. The bridge itself is steel truss construction and is the last such bridge in Ozaukee County that is open to traffic. The bridge was built in 1928. There has been some talk about replacing it, but that won't happen in the near future.

The bridge crosses the Milwaukee River about a block west of C.T.H. 'W', which was State Highway 57 until Interstate 43 was built. When Interstate 43 opened in 1976, Highway 57 was routed over the new highway. The traffic flow through the village was then greatly reduced. 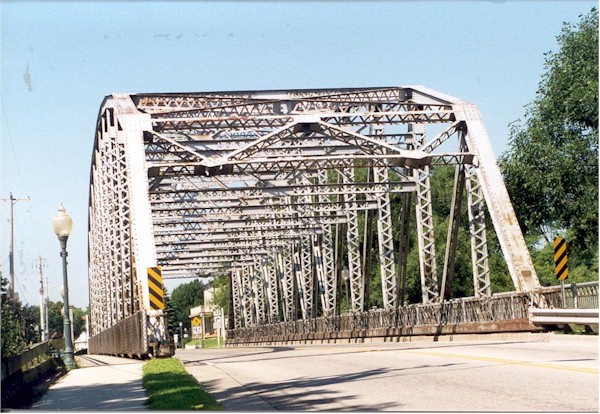 Other Steel Bridges in Ozaukee County
There are 3 other steel truss bridges that still exist in the area. The bridge that crossed the Milwaukee River on Bridge Street in Grafton was moved to Lime Kiln Park in that village, where it now crosses a small creek. It is only open to pedestrian traffic. The former interurban bridge that crosses Cedar Creek in Cedarburg was recently refurbished. It too is only open to pedestrian traffic. The third bridge is located in Newburg (Washington County). It crosses the Milwaukee River and is open to vehicular traffic.
Community
Voice
Notify Me
Employment
Video
Tourbook
/QuickLinks.aspx
/QuickLinks.aspx