Lighthouses are fascinating structures and they become more fascinating when they are easily assessable. The Port Washington lighthouse is one that is easily assessable, but it does take a bit of a walk to be able to stand under it, if that would be your preference. The walk is about 2,500 feet along a breakwater of steel decking, very large stones and concrete. During the evening of May 31, there was a constant stream of people walking out to the lighthouse which was built in 1935.

The red light mounted on the top of the lighthouse is classified as a harbor light. It flashes once every 6 seconds. The light is 58 feet above the breakwater and 78 feet above the surface of the water. It is visible to a boat 8 miles out from the harbor. A fog horn is also mounted on the top of the lighthouse. It gives 2 blasts in every 30 seconds at 24 second intervals. The horn is only operable during the months of April through November.

Before this lighthouse was built, a light station atop St. Mary’s Hill functioned in a similar manner. This station was built in 1860 and replaced a light tower that had been built in 1849 on land just east of the 1860 station. From 1860 until the mid 1970s, U.S. Coast Guard light keepers and their families lived in the light station. They first tended the tower light that rose above the station, then an 1889 wooden pier-head light and finally the current pier-head light. When the foghorn and light were automated in the mid 1970s, the keeper’s post was eliminated. 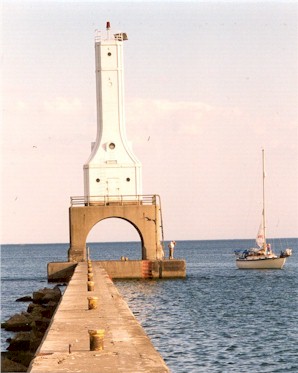