Over three quarters of a century ago, a 19 year old, $40 a month school-teacher, stirred by a deep love of the American Flag, held the first Flag Day exercises in a little country schoolhouse located near Fredonia. Bernard J. Cigrand, who later became a professor of dentistry and a college dean, began a lifelong crusade on June 14, 1885, to honor the adoption of the Stars and Stripes by the Continental Congress on June 14, 1777.

Thirty-one years later in 1916, his devotion to the Flag was rewarded when June 14 was declared as National Flag Day by President Woodrow Wilson, who said, 'the Flag has vindicated its right to be honored by all nations of the world and feared by none who do righteousness.' In 1949, long after Dr. Cigrand's death, Congress and the President of the United States proclaimed the Flag would be displayed on all government buildings on June 14 and asked the American people to join in the observance of the Flag's anniversary.

The last class at the school was held in 1916. The building stood empty for many years and the land surrounding the school changed hands many times. In 1947 the National Fraternal Congress crusaded for the restoration of Stony Hill Schoolhouse. Restoration began on the building and by 1952 it began to resemble the school Bernard Cigrand knew in 1885. Now, each year on the Sunday before June 14, a special program and celebration is held at the school with additional activities and a parade held in Waubeka. 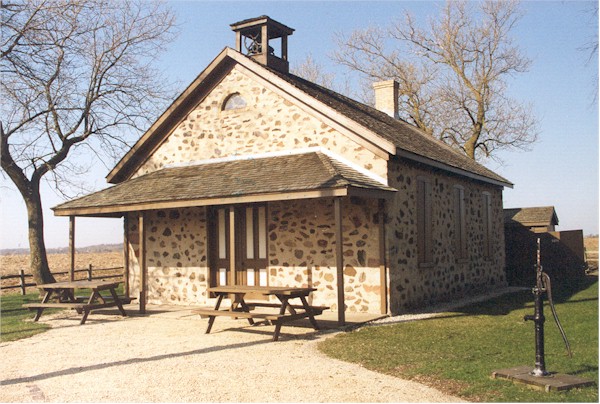