The Cedarburg Woolen Mill, which later became the Wittenberg Woolen Mill, was founded by Frederick Hilgen, who also was a partner in several other ventures, son-in-law Dietrich Wittenberg and Joseph Trottman. The original structure cost $30,000. Executives and supervisors were paid $3 for a 12 hour day. The bridge over Cedar Creek was built in 1870 and this allowed them to build 3 warehouses on the east side of the creek. A branch mill was built in Grafton in 1880. In 1893, there were 12 buildings, and this was the most extensive woolen mill west of Philadelphia, employing over 100 men and women at its prime.

The corner building was used as their office and the rear of that building was used for storage. The office area later became a retail store and they became one of the first businesses to use mail order catalogs.

They went out of business in 1968, and after letting the buildings sit idle, an offer was made to purchase all the buildings, with the intent to raze the buildings and to replace them with a filling station and a mini mart. This sale was stopped, and then William Welty purchased the corner building and opened a restaurant there. Jim Pape purchased the other buildings, opened a winery and then, in time, rented out the balance of the space, permitting the opening of over 30 shops, artists studios, and restaurants. 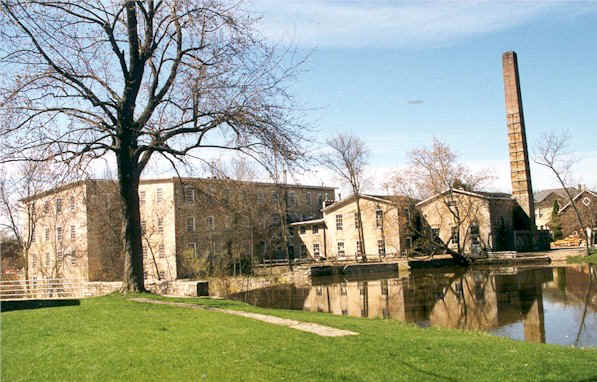