The term "old" is used because this building was replaced by the present firehouse in November of 1964. This building was constructed in 1908 to replace the previous firehouse that had been destroyed in a fire on April 2, 1907. This fire had been discovered at 2 a.m., so evidently it had a good start. Firemen could not retrieve any of their equipment and so their steamer, an old hand engine, the hook and ladder wagon, several hose wagons and all their hose was lost in the fire.

The fire departments from Grafton, Thiensville, and Milwaukee were notified by telegraph concerning the fire. The Grafton department was the first to arrive at the scene with their hook and ladder wagon and hose. The Thiensville department was next. Their equipment was pulled by 2 draft horses that dropped over and died from complete exhaustion. The fire was brought under control soon after their arrival. The Milwaukee department had loaded an engine on a railroad flat car, but they were called off before they left for Cedarburg.

The Kuether Hotel to the north of the firehouse suffered severe damage and a barn behind the hotel burned to the ground. While the 1908 building was called the firehouse, it also provided additional space for city offices. 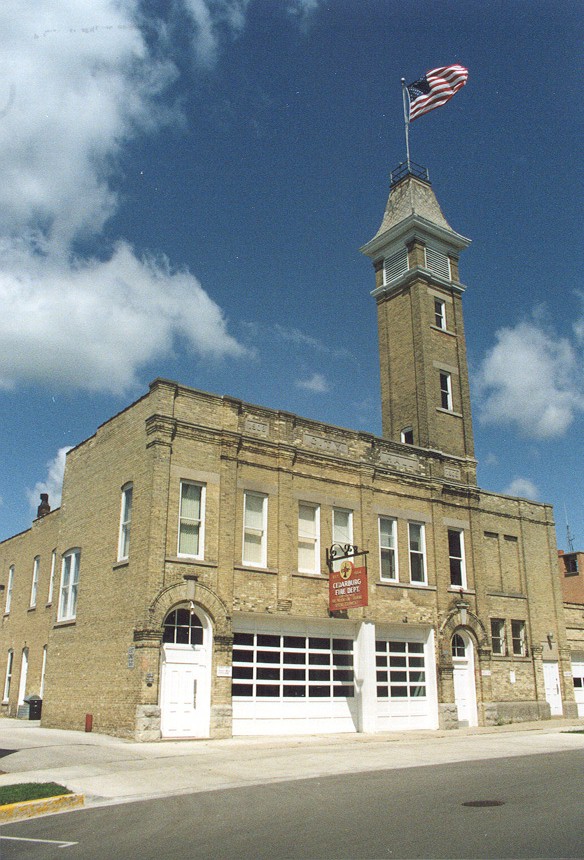 By the mid 1930s, the second floor housed the City Council chambers, the City Clerk’s office, the Light and Water Commission office, the public library and the American Legion meeting room. Initially, the "meeting room" at the rear of the first floor was used as a stable for the department’s team of horses. Besides the apparatus area on the first floor, the police department office, 2 jail cells, and eventually the American Legion ambulance also were located on the first floor.

In 1926, the department purchased their first motorized piece of equipment. In 1951, the department engaged in a program of modernizing its entire operation. Three new trucks have been replaced several times over the years. The fleet of trucks was also enlarged. Eventually, the 1964 fire house had to be expanded to hold all the vehicles and equipment.

Every group occupying the 1908 firehouse moved out, each to separate quarters. The fires department also moved out, but within a few years, they again occupied the first floor of the building.

Today, if someone would look through the windows of the front doors, they would think they were back in the 1920s because the first 2 pumpers (a 1924 Graham and a 1928 Pirsch - known as the "city pumper") owned by the department have been refurbished and parked just inside the doors, making it look like they are ready to respond to a fire call. A 1907 Howe horse drawn pumper once used by the department was also refurbished and is parked behind the pumpers. It appears in several parades each year, including the Milwaukee Circus parade. The men that accompany this vehicle wear the type of uniform that was worn by firemen in the mid 1920s.
Community
Voice
Notify Me
Employment
Video
Tourbook
/QuickLinks.aspx
/QuickLinks.aspx